Winter Special - $50 Off All Charters ! Use code "winter22" (excluding Saturdays)

REDFISH ON THE FLY

If the fishing world had a Pound for Pound Championship (like MMA does) theredfish would be a contender – right up there with ulua or steelhead or dorado or northern pike as a world class fighting fish.

Also known as red drum, channel bass, puppy drum spottail bass, or simply red, scientists know this fish as Sciaenops ocellatus, while sportfishers know the redfish as a beautiful, smart, fighting fish by land and sea – but especially in the shallows.

Kyle Morella is a Charleston local who has spent many many hours fly fishing for redfish – for fun, and professionally: “Redfish are kind of in a league of their own when it comes to comparing them to any other saltwater fish. It’s a fish you want to catch though. They are smart, aggressive, strong-willed. They hang out in super shallow water and places that makes them tough to catch and they can evade you in a blink of an eye.”

Redfish can be caught at sea using live bait or soft plastics such as ZMAN and they also can be caught in the shallows, in Charleston’s rivers, using fly fishing gear: “They fight hard, they’re aggressive, relentless, as well as evanesce. These fish are incredible, plain and simple, they need merely inches of water to allow them to get where they want. But they can also disappear in inches of water never to be seen again. You go from low tide where the fish is almost completely out of the water belly crawling on a mud flat feeding, to a flood tide where they are cruising in under a foot of water sticking their noses in the grass to eat crabs showcasing their tails.”

Weighing in as big as 94 pounds 2 ounces (the world record, caught on a mullet in Avon, North Carolina in 1984), there are many ways to tackle a redfish by land and sea, but if you want to go bare knuckle and stripped down, fly fishing is the go: “Fly fishing for redfish is a very close-range game,” Kyler Morella explained. “so you’re always close to the shore where there are grass flats, grass edges, skinny creeks, creek mouths and big mud flats with oyster mounds. you can target them from the intercoastal waterway (know as ICW) to the inland waters, such as the Wando and Ashley River.”

Fishermen come from across the country and as far away as Sri Lanka to fly fish for redfish in Charleston waters, and the question the guides all get is: Is the redfish closer to a trout or a bass?

Morella says: “That can be a tough one because redfish kind of have a little bit of both characteristics. Redfish do eat topwater flies like bass where they chase the fly and attack so in that sense they are similar. But bass don’t have current, typically  and redfish do. Redfish love current similar to trout because current brings them food without them having to work too hard for it. But, if I had to pick one it was the most similar to, I would say a bass.”

A recent purchase, the Hells Bay Waterman 18 is the perfect boat for prowling the shallows of the lowlands. The boat weighs only 610 pounds and draws 4.5” with engine and fuel. Redfin Charters’ Waterman is powered by a 60 horsepower, four-stroke engine.

It seats three: Two anglers and the third is a guide who is the driver, the pusherman and the spotter.

That steel cage around the engine on the Waterman isn’t just for protection, it also serves as a high platform for engine-off, no vibration poling through the shallows, and high ground for spotting tailing redfish. .

For redfish, the typical set up would be an 8 weight rod paired with an 8 weight reel and 8 weight, weight -forward floating (WFW) line to match, attached to that would be a 7-9 foot tapered fluorocarbon leader.

The flies used for redfish imitate what the fish are hunting for in the shallows. According to Kyle Morella: “Redfish are methodical, depending upon the time of year and part of the tide you are fishing really determines your fly selection. The basic coverage of redfish flies are usually a little smaller like a #2 or #4 hook. The patterns used represent crabs, shrimp and smaller baitfish, but there are hundreds of modified patterns anglers have created resembling these. Colors usually consist of more natural colors but black and purple flies can be a go to.”

Not to worry, because around Charleston, redfish are thriving although time of the year and tides are also part of the complex equation of fly fishing for redfish. Summer time has bigger tides in the Charleston area – also known as flood tides. At this time, the fish travel up on to hard-bottom grass flat to feed. This is called “tailing redfish” and Charleston is known for this.

According to Kyle Morella: “When an angler wants to target tailers, water level has to be over a certain height. Late fall to spring we have smaller tides so we have to target these fish either coming out of the grass moving into shallow mud flats(falling tide) or while they try to move into the grass on shallow mud flats (rising tide).”

FALL IS BACK TO SCHOOL

Prime time for redfish on the fly is fall on a dead low tide coming up, where the water temperature has dropped and the water clarity improves, giving the fish a little more oxygen in the water making them more aggressive. This is when the redfish start to school up.

Time and tide also determine how long an excursion lasts: “Depends on the angler,” Morella says. “some anglers want to fish for 8 hours, some only want a 4-6 hour trip. The 4 hour trip could be just a flood tide in summer months and early fall, or it could be a lowtide excursion. An 8 hour trip could result in a rising tide to a flood tide, here again in summer and early fall months, or from a falling tide to dead low to a rising tide, giving you more opportunities at shots at fish. Where I go really depends on the tides, the wind and how the fish have been acting.”

Do you really need a guide to go after redfish on the fly? Can’t you just wing it? Kyle Morella assures you: no. And he speaks highly of all the Redfin Charters guides: “The guides are usually guys who have invested a lot of time in the art of fly fishing and understanding how to fish for them using flies rather than artificial baits or cut bait. Their experience is very high because fly fishing in all honesty is a game of failure and they are many many levels of success when it comes to fly fishing. So on an experience level you can usually say a fly fishing guide has seen plenty of ups and downs, had dealt with more than enough adversity and knows how to react and change to get those fish to eat.” 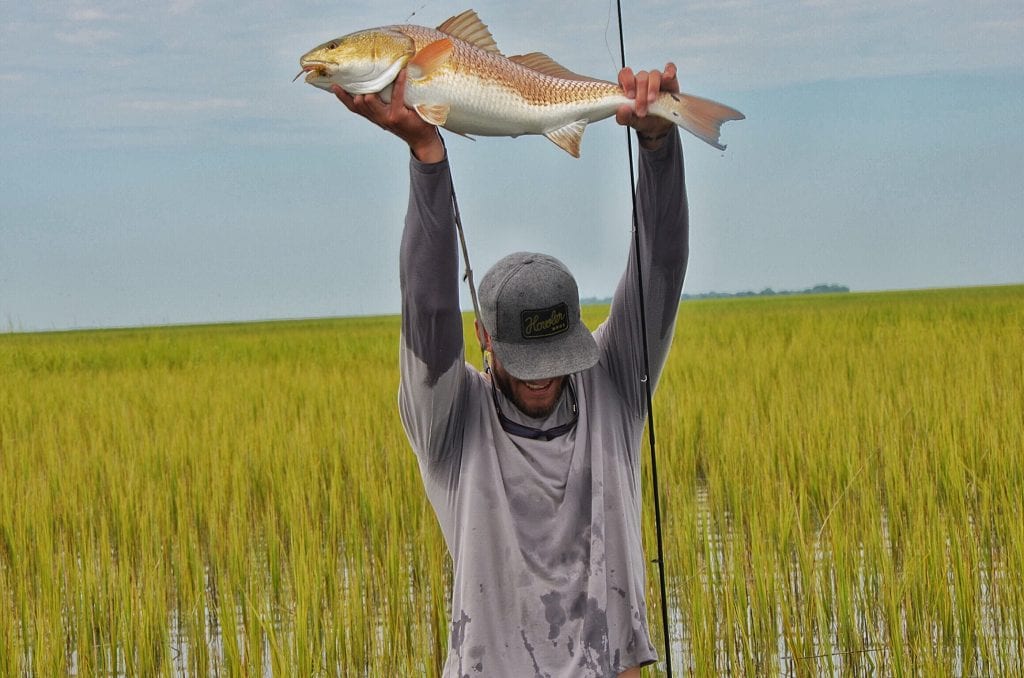